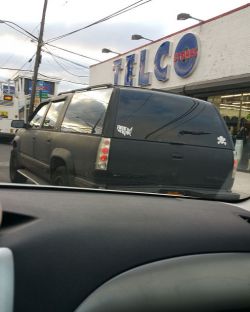 We were so appalled the first time we saw the sticker we grabbed our phone for a photo.

That is what asylum seekers presenting themselves at U.S. ports of entry along our southern border are being told as they are preemptively turned away in contradiction to U.S. and international law. Yet when in desperation those same asylum seekers subsequently cross elsewhere along the border, we suddenly have the resources to apprehend them, detain them, prosecute them, and, in that process, rip children away with no warning. And, in cases, separating families even when they have presented themselves legally according to U.S. law. at a U.S. port of entry.

One might hope we can all agree that infants and toddlers, indeed, children of any age, stripped from their parents at our southern border violates humanitarian and moral norms. But in this era of rising xenophobia and fears over America's changing demographics, it's quite likely to hear, "They should not have attempted to come to the U.S. in the first place, it's their fault."

One might hope we can all agree that families escaping violence, including prior bodily harm, should be eligible to seek asylum. Yet the U.S. Attorney General declared in a decision rendered June 11th, that domestic and gang violence are not grounds for asylum.1

Our own parents arrived as refugees, indeed, as asylum seekers. Return to their post-WWII Soviet-occupied homeland would have meant the GULAG—orders to deport them to Siberia awaited their return. Thus, our very personal interest. What did Sessions do—and undo—in his doing?

Sessions undid a Justice Department finding in a years-long asylum case which had granted asylum to a Guatemalan victim of repeated, violent domestic abuse.

Depending on the facts and evidence in an individual case, “married women in Guatemala who are unable to leave their relationship” can constitute a cognizable particular social group that forms the basis of a claim for asylum or withholding of removal under sections 208(a) and 241(b)(3) of the Immigration and Nationality Act, 8 U.S.C. §§ 1158(a) and 1231(b)(3) (2012).

The DoJ ruled at the time that a Guatemalan domestic abuse victim who was not in a position to leave an abusive relationship—under threat of being killed should they leave, along with other individuals in the same characteristics and circumstances, constituted a recognizable "social group." Individuals who are persecuted members of a social group are eligible to seek asylum in the United States.3

Sessions argues that this 2014 decision was incorrect and failed to observe precedent:

Later that year, the Board decided A-R-C-G-, which recognized “married women in Guatemala who are unable to leave their relationship” as a particular social group—without performing the rigorous analysis required by the Board’s precedents. .... Instead, the Board accepted the concessions by the Department of Homeland Security (“DHS”) that the respondent suffered harm rising to the level of past persecution, that she was a member of a qualifying particular social group, and that her membership in that group was a central reason for her persecution.

Sessions cites various precedents and the need to adhere to them. However, he ignores a "precedential" clarification proposed 14 years earlier, our emphasis:

SUMMARY: This rule proposes to amend the Immigration and Naturalization Service (Service) regulations that govern establishing asylum and withholding eligibility. This rule provides guidance on the definitions of ‘‘persecution’’ and ‘‘membership in a particular social group,’’ as well as what it means for persecution to be ‘‘on account of’’ a protected characteristic in the definition of a refugee. It restates that gender can form the basis of a particular social group. It also establishes principles for interpretation and application of the various components of the statutory definition of ‘‘refugee’’ for asylum and withholding cases generally, and, in particular, will aid in the assessment of claims made by applicants who have suffered or fear domestic violence. The Service believes these issues require further examination after the Board of Immigration Appeals (Board) decision in In re R–A–, Interim Decision 3403 (BIA 1999). Further, the rule clarifies that the factors considered in cases in the Court of Appeals for the Ninth Circuit regarding membership in a particular social group are not determinative. Finally, the rule clarifies procedural handling of asylum and withholding claims in which past persecution has been established. This proposed rule has been prepared and is published in conjunction with the final rule on asylum procedures, which incorporates both the interim rule amending the Department of Justice (Department) regulations to implement the Illegal Immigration Reform and Immigrant Responsibility Act, 62 FR 10312 (1997), and the proposed past persecution rule, 63 FR 31945 (1998).

Instead, Sessions wrote the following in his decision, our emphasis:

Generally, claims by aliens pertaining to domestic violence or gang violence perpetrated by non-governmental actors will not qualify for asylum.i While I do not decide that violence inflicted by non-governmental actors may never serve as the basis for an asylum or withholding application based on membership in a particular social group, in practice such claims are unlikely to satisfy the statutory grounds for proving group persecution that the government is unable or unwilling to address. The mere fact that a country may have problems effectively policing certain crimes—such as domestic violence or gang violence—or that certain populations are more likely to be victims of crime, cannot itself establish an asylum claim.

This has been widely reported in the press as Sessions deciding that domestic abuse or gang violence no longer qualify as a basis for seeking asylum in the United States. This confuses the effect with the cause. Sessions states outright that he is in no position to judge the circumstances which drive someone to seek asylum. His overturning of asylum status in this case is not based on the nature of the abuse, as horrific as that may be. Rather, Sessions contends the vast majority of asylum requests are not credible, and therefore should be denied.

Short version: If you can't bring an authoritative official verifiable paper trail documenting the history of your personally having been abused or threatened by gangs, the U.S. will no longer take your word for it.

If Sessions' ruling is allowed to stand, the Trump administration will be emboldened to meet any legitimate claim for asylum at our border with a simple, "We don't believe you." Sessions' "believability" standard opens the door to the U.S. denying legally protected justifications for seeking asylum.

Consider the dangers involved in simply reaching America's southern border from Central and South America. Only someone truly desperate would undertake that perilous voyage. The moral, and legal, response is to treat refugees' claims as legitimate unless there is a specifically documented basis to think otherwise. Not to mention, some of the worst gang violence which refugees are fleeing south of the U.S. border is perpetrated by gangs exported from the United States.

Do we really need to fear asylum seekers?

Crime and economic statistics are clear and unequivocal:

Immigrants are our surest path to a safer and more prosperous America for all.

Instead, the Trump administration is pursuing policies designed to keep "the other" out. Attorney General Sessions has established a "legal" framework, however specious, to position the United States to preemptively turn away asylum seekers and refugees who knock on our door desperate for a life that can be lived in safety. Denying legitimate asylum requests in violation of U.S. or international law is not just immoral, but criminal.

Support SaveWorkingAmerica!
Site contents Copyright © 2020, All Rights Reserved. Wikipedia™ and external site links are provided for convenience and do not constitute endorsement of, affiliation with, or responsibility for such content. Reproduction and use herein of external content for the purpose of reporting, commentary, and analysis is protected under U.S. Title 17 Chapter 1 § 107 without prejudice to the rights of authors as to the original work. Works of the U.S. Government are reproduced in accordance with U.S. Title 17 Chapter 1 § 105. This site does not use cookies to track user activity.
Design and Hosting [Clear-and-Simple] · Chicago · New York